Do you know someone who gets hangry? Come 11:30 a.m. or 6:15 p.m., if you don’t feed this person, he begins to get irritable and unresponsive. Doing anything hard is asking to get into a fight.

Maybe that person is you? 😉

In my life, that person is my ordinarily level-headed, rational, reasonable, scientist-of-a-husband, Alex. When lunch or dinner time is around the corner, suddenly logic disappears and he gets cranky, then hangry, then catatonic. It’s a sight to see.

His hangry mood is the reason we got into our first big fight ever. It’s also why I have to bring protein bars with me everywhere I go, so I can quickly stuff them in his mouth to avert a crisis. 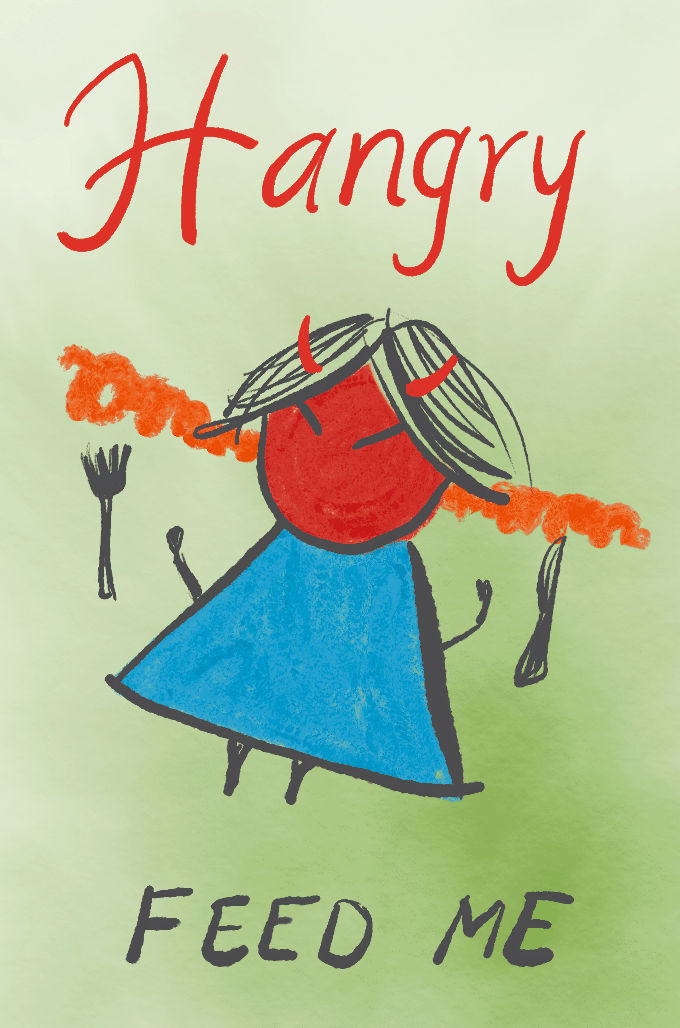 Last week, just before Alex was about to set off on his bike ride, he was feeling hungry. Uh oh! I quickly fixed him a small salad with mozzarella, croutons, and a balsamic-olive-oil vinaigrette dressing. It wasn’t highly caloric. Nor was it “carby” or sugary.

He wolfed down the salad in a few minutes, as usual standing over the kitchen sink. Upon setting the bowl in the dishwasher, he remarked:

Wow I feel great again. Eating must be a psychological thing because there’s no way that the food has kicked in yet.

Indeed, his eyes were focused and he seemed alert, a far cry from his catatonic state several minutes ago. He was refreshed like a thirsty sponge who had a sip of water and sprung back to life.

Was he right? Had enough time passed for the glucose to hit his brain and the glycogen to refuel his muscles? Or did the food simply give him a psychological lift?

I smiled at him and said, “Oh yes, and let me tell you about the academic paper I just read about how labeling foods differently can make you feel fuller.”

Our mindset is very powerful.

You’ve probably heard of the effect that your thoughts, beliefs, and expectations can have on your health, such as your ability to heal even without active drugs or medicine, due to the placebo effect.

In the realm of food and dieting, academic studies have found that your mindset has an effect on your enjoyment of food and drink too, such as when labeling foods as “indulgent.”

For example, people think Coke tastes better when it’s served in a Coca-Cola branded cup. People reported that they enjoyed yogurt and sandwiches less when the strawberry yogurt and cheese sandwiches were labeled “low-fat.” People think the “MIT brew” beer with a “secret ingredient” tasted better even though that ingredient was balsamic vinegar.

And you’ve likely heard about the marketing studies that showed that wine drinkers thought the highest priced wines tasted the best in blind tasting tests. 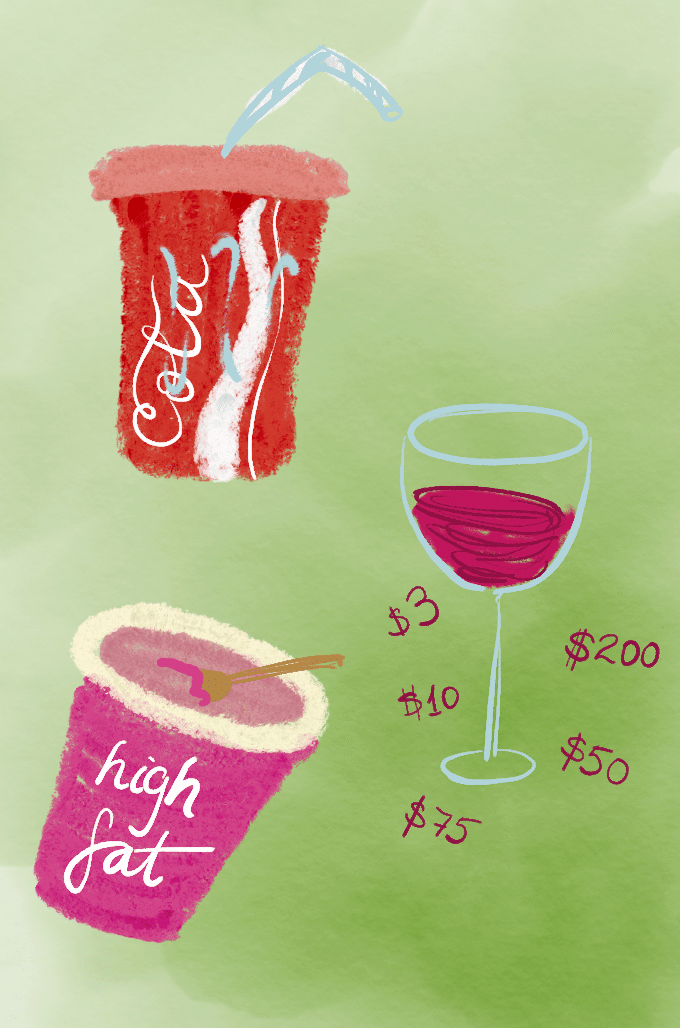 Knowing that our mindsets can have a major impact on how much we enjoy food and how satisfied we feel after eating, could our mindset also affect how full we feel based on how we expect the food to taste?

And how can we play with this idea to improve our lives?

Let’s see what SCIENCE has to say about this.

This is part 3 in a series of posts inspired by a talk I attended in San Francisco with Professor Christopher Gardner. This talk blew my mind, and I knew it was too useful and funny for me to selfishly keep to myself. It also reminded me to tap into academic research to learn how we can live and eat better. I can’t take credit for any of it except for absorbing and regurgitating the information with some whimsical illustrations and photos. As you go through the information, put your Skeptics Hat on and remember to ask yourself: Is this true? What experience in my life supports this? What negates it? If this is true, then what?

Remember the study about whether you might be Sabotaging Yourself By Eating Food Labeled “Healthy”? Stanford psychology graduate student and first author on that paper, Bradley Turnwald has an advisor Alia Crum, Ph.D., an assistant professor of psychology. Professor Crum previously published a paper about what effect your mindset can have on your physiological hunger levels. In other words, could your mindset, and not simply nutrients, determine if you have a greater hunger response?

Let’s dive in to see what they found.

What was the Study about?

Researchers conducted a study to measure the levels of a hunger hormone called ghrelin in participants’ stomachs. Ghrelin is what makes you feel hungry and regulates your appetite. It also appears to have an effect on how much energy you use.

A lot of progress happened in the last decade to allow researchers to better understand the role of ghrelin and other mechanisms in the body to regulate hunger, how much food you eat, and body weight.

Discovered in 1999, ghrelin is one physiological indicator we can look at to figure out how satisfied and full someone feels, as opposed to simply asking using a survey. The higher your ghrelin levels, the more you will want to eat before you feel satiated.

Because the relationship between metabolism and your brain is very complex, the researchers wondered whether they could influence your mindset. Second, would that influenced mindset then affect how much ghrelin is in your system after eating and drinking? 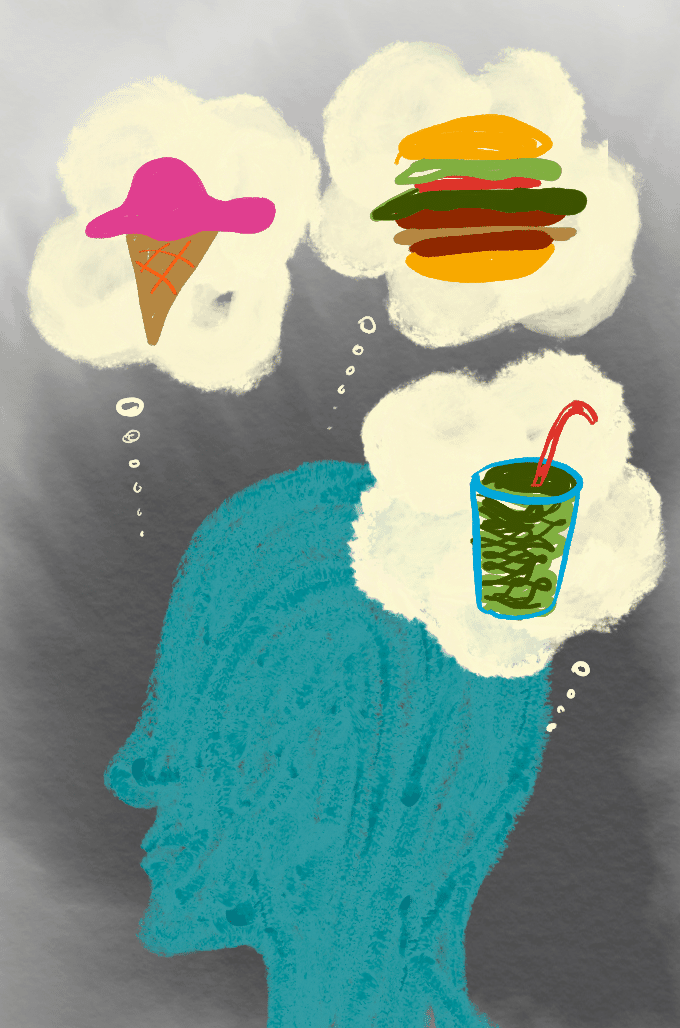 Considering how thoughts, beliefs, and expectations could affect your body physically, researchers hypothesized that “subtle changes in the mindset associated with eating might influence the release of ghrelin in response to food consumption” (Crum et al., 2011).

The researchers recruited 46 participants to join a “Shake Tasting Study” at Yale. The group was mostly students and about two-thirds women.

In the same vein as many famous psychological studies that employ deception, this study told participants that they were going to taste two different milkshakes that the metabolic kitchen at the Yale Center for Clinical Investigation was designing.

The participants were led to believe that the goal was to figure out whether the milkshakes tasted similar even though the milkshakes had different nutrients, such as one was high fat versus low fat and high sugar versus low sugar.

What did they do?

The “indulgent” milkshake was advertised as a high fat, high-calorie milkshake. The second milkshake, dubbed the “sensi-shake”, was presented as low fat and low calorie.

The researchers even commissioned custom-made graphics to depict the indulgent milkshake as the classic milkshake stereotype you think of when you imagine a rich and luxurious milkshake. There’s whipped cream and chocolate sprinkles on top with a syrupy liquid dripping down the sides of the glass. The font is curly lettering with the big tagline, “Decadence you Deserve.” The label clearly shows 620 calories per serving, with a very high fat and sugar content.

The “sensi-shake”, on the other hand, has a lighter label reminiscent of diet shakes. The font is san serif without much flourish. There’s not even a glass with a milkshake in it. Instead, there’s a picture of a vanilla orchid flower and the tagline “Guilt Free Satisfaction.”

The participants came in twice: they would drink one milkshake one week and the other milkshake condition the following week. They had their blood measured after resting for 20 minutes, then at 60 and 90 minutes. During these intervals, they were asked to view and rate the label of the shake, comment on the taste and smell of the shakes, then finally drink the whole milkshakes.

What were the Results?

The study found that when participants drank the “indulgent” milkshake, they had a steeper decline in ghrelin levels compared to when they drank the “sensi-shake.” In fact, the “sensible” mindset was linked to a relatively flat ghrelin response.

You would expect this behavior if the shakes truly were different in nutritional content. However, since the “indulgent” shake and the “sensi-shake” contained the same nutrients and calories, researchers are pointing to mindset as the reason for the different findings in each condition. 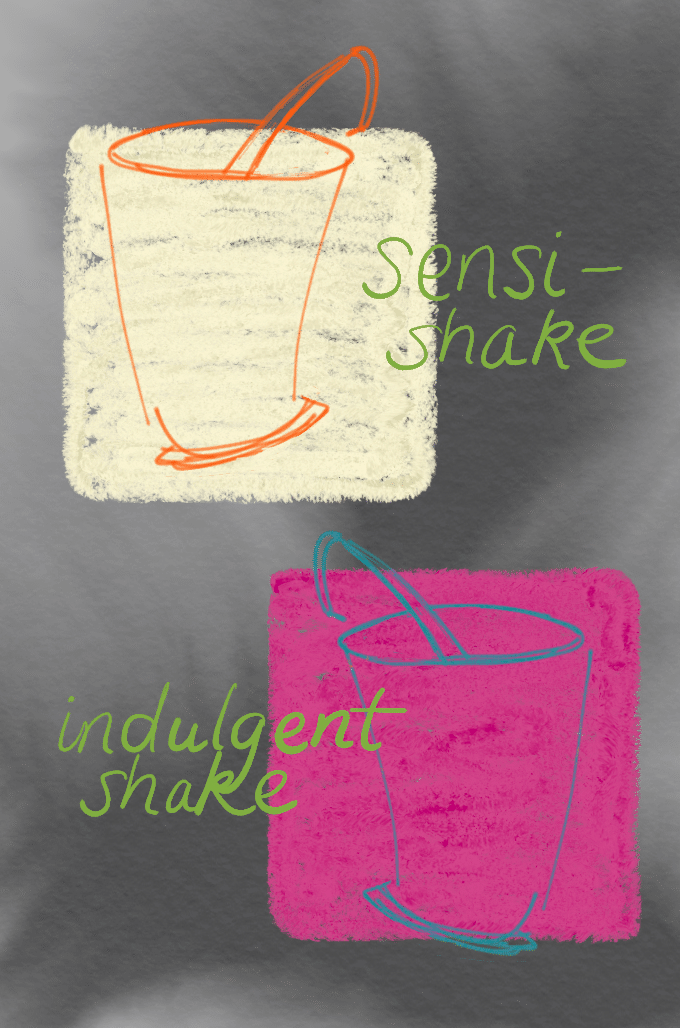 Furthermore, the researchers point out that the real-world is more complex than the simple label manipulation in this study. There are more factors than how a food label is marketed that can affect our mindset when eating or drinking a food.

The researchers remind us that in the real world, food companies frequently put a marketing spin on a food label, and it’s not always for the benefit of your health.

The authors point out that foods are frequently labeled as “low-fat” only because it is lower in fat than the full-fat option sold by the same company. But it is still considered a high-fat food.

For example, you can get Reduced Fat Oreos that are vegan. Are these Oreos still healthy?

What can you do with this information?

Considering the powerful effect that your mindset can have on your physical body, including how it affects your hunger levels, how can you begin to approach healthy foods with a mindset of indulgence and decadence? How can you use your imagination to trick your brain into feeling more physiological satiety after eating?

One trick is to give your foods and drinks indulgent names.

Another strategy is mindfulness when eating.

Savor foods by eating slowly, smelling the delicate aromas, feeling the textures, and appreciating the colors.

When you eat slowly like this, you get to appreciate every single bite. Sooner than you realize, you are full and stop eating before you’re stuffed.

That’s the beauty of the placebo effect — it’s free and there are no side effects. All you need is to harness your mind.

2 thoughts on “The Power of Your Eating Mindset”