Alex and I spent more than $300 dollars on broccoli, cauliflower, lettuce, and other vegetables in the last 6 months, and we’ve yet to taste a bite.

No, we didn’t throw the food out.
Instead, this food is baby food. Not the mushy food you feed to a baby. I mean baby plants, seedlings, waiting to grow up into tall, beautiful bouquets of lettuces and cilantro.

But why did it cost more than $300?
We started two gardens: a community garden and a balcony garden. The community garden has a $75 rental fee so we were almost half way to the $200 mark at that point. Then there’s the soil, pots, the seedlings, drip irrigation for our balcony, and so on. In this article, I’m going to focus on community gardening. In a future article, we can cover the balcony garden which was both challenging and rewarding in its own way.

What is a community garden?
Historically, people have been moving into urban areas since the Industrial Revolution. This trend towards urbanization continues today. Housing is denser and denser in urban areas every year. Even in the Bay Area, where city councils and some residents do everything within their power to impose building moratoriums, there are new units built every year. Old buildings converted into chic new apartments and lofts. We’re packed in together like a vacuumed package of breakfast wieners.

“A majority of the U.S. population lives in incorporated places or cities, although these areas only make up a small fraction of the U.S. land area,” according to a 2015 report published by the U.S. Census Bureau. “U.S. Cities are Home to 62.7 Percent of the U.S. Population, but Comprise Just 3.5 Percent of Land Area”

One of the first things to get sacrificed in dense housing is the yard.
None of our neighbors have front or back lawns. We manage to pack more people in per square foot as a result. The apartment buildings and townhouses have shared wall spaces. Usually, there’s a public park nearby to reduce the congestion but not always.

There’s a lot of advantages to having denser living spaces. Personally, I love not having to mow a lawn. The downside, though, is lack of space growing our favorite herbs and vegetables that are hard to find in the store.

Alex and I are lucky enough that we live in a neighborhood with a community garden.

I first learned about our community garden two years ago. But we never took action to rent a plot because I was always full of excuses and other responsibilities. This year, Alex and I decided to commit to learning how to grow some of our own food. It’s been a process full of surprises. I’m looking forward to sharing those surprises with you.

Why invest in a community garden?

There’s nothing like fresh herbs and vegetables. The aroma of freshly cut basil is unparalleled. That’s why we buy from CSA farms. When you buy a bunch of basil where the stem has already dried out and the leaves are bruised because the plant was cut a few days ago and was battered during transportation, the basil has lost its essence. It’s missing its “basil-ness”.

We garden because we get to cut the basil and make pesto out of it in less than 30 minutes. This immediacy captures the freshness and fragrance of the herb.

Even when it’s not fresh, it’s still better.
One thing that surprised me was drying out herbs. We had too much thyme and winter savory that we couldn’t use while they were fresh. (Check out our Jambalaya recipe where we used this thyme). We bundled them up and dried them. These dried herbs were still more fragrant and I felt I got a better taste of my food than store-bought herbs. Sure, this could be simply the placebo effect. However, my dried herbs still seem to have a “freshness”, probably because they weren’t kept in a warehouse for months on end.

I first learned about community gardens from visiting the large sprawling garden in McClellan Ranch Park, Cupertino.
I met a friendly gentleman sitting in his off-white, plastic lawn chair. He wore a panama hat on and held a bear in his hand as he watched his fire-engine-red cherry tomatoes. I had no idea what a community garden was. I was wandering around the ranch, reporting on a story. He saw I was curious. He offered me a grocery bag stuffed full of his beautifully red ripened cherry tomatoes. He explained he and his neighbors shared the land and grew whatever they wanted. People shared tools, split their harvest, and exchanged fruits and vegetables.

I loved the idea of sharing and community.
But what I loved more what watching that man, sitting there on a Sunday afternoon, drinking his cold beer, watching his plants grow and bloom. I love that slow life, even if it’s just for an afternoon, getting in touch with his hobby and watching his hard work germinate and develop into a plant that bears him fruit. This left an indelible image in my head.

Years later, we finally make that vision happen.
I’ve been fascinated by the idea of a community garden. I grew up with a garden in my front yard when I was a little kid. I helped my mum grow all kinds of vegetables such as corn, tomatoes, green onions, and Chinese vegetables like chayote (a.k.a. pear squash or choke) that were not commonly sold in conventional grocery stores. I loved gardening because our corn was the corn we grew was the sweetest I have ever tasted. You can’t buy that kind of corn in the store.

What we learned from gardening

Gardening has been a great joy to us.
It’s been an enjoyable experience to connect more deeply with the food that we eat. I learn a lot from our community garden. In the last few months, I’ve learned a lot about seasonality. I learned that during the fall and winter, the best plants to grow are the brassicas, like cauliflower, broccoli, and root vegetables like carrots and radishes (ewww), as well as the alliums, like leeks and onions.

It’s also an eye-opening experience.
I didn’t realize how much weeding we need to do. Weeding is a relaxing activity to do on the weekend. But only because we’re weeding a teeny, tiny little plot. I learned that the organic farming techniques don’t use passed pesticides. So, they are doing weeding by hand.

That means what we do for 30 minutes during the weekends for “fun”, some farm workers are doing full-time every day. This kind of backbreaking activity requires bending over and pulling out little grassy plants for hours and hours. And it’s a never-ending battle with the weeds.

Learning this helped me really appreciate every last leaf of lettuce I eat.
I was already careful to avoid wasting food. But now I appreciate even more how manual organic farming is. And I’m even more careful to use as much of a plant, or any food for that matter, as I can. I use the beet tops now and stopped throwing them out due to laziness. And I try to save leftovers (as long is the food hasn’t spoiled) instead of tossing it out. (It’s better to have leftovers then force myself to overeat.)

The garden isn’t enough to feed us.
When we first started, Alex kept making fun of me for thinking that we would be able to grow a decent amount of food. He said, “At this rate of gardening, you might be able to feed yourself for 1 to 2 weeks.”
I’ve since learned, the point was not to replace our grocery shopping. Rather, we grow things that we can’t buy in the grocery store. And we learn about growing food. The joy is in gardening itself. 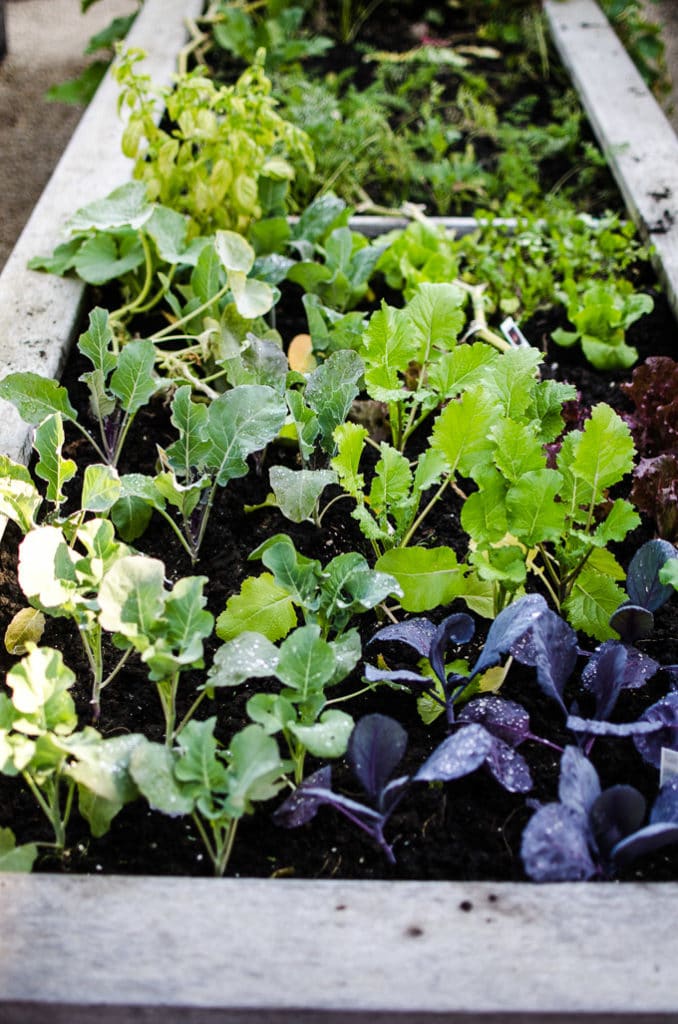 Don’t be fooled. Our vegetables cost more to grow than Whole Foods.
Since we started gardening in the winter, we had to buy a lot of seedlings that already germinated. They began give growing in a nursery. If we planted seeds directly into the ground, we will probably not be able to grow anything.

This isn’t something I’m proud of.
I know gardening should be cheaper than shopping at the store. Next summer, we will have much better luck with starting from seeds and that’ll be a lot cheaper.

We’ve also made some new friends thanks to the community garden.
The first week we were there planting our vegetables, one of our neighbors gifted us a handful of chives that needed to be harvested. Our neighbors knew they wouldn’t be able to finish it all. It was a nice treat to get.

So, if you’ve ever thought of joining a community garden, do it!
Google your neighborhood and community garden. Many places that are considered food deserts because these communities don’t have access to fresh fruits and vegetables are starting community gardens as a cost-effective alternative. Go on! See what’s out there.