What can you do with leftover crêpes? Learn the best way to freeze crêpes and how to reheat them. You can apply these tips to spruce up refrigerated crêpes or even premade crêpes from the supermarket.

Almost every time I cook crêpes from scratch, I end up with several perfect specimens leftover. It seems like a shame to throw them out. Yet, I can’t force myself to eat them when I’m already full. That’s why I’ve experimented over the years on how to store crêpes in the fridge, how to freeze them for later, and how to reheat them.

In this article, we’re dealing with a hodgepodge of related tips:

I’ll include a few nuanced answers (as usual) depending on your situation (storing 2 crêpes versus a dozen). Let’s jump in!

How to store crêpes immediately

The crux of freezing crêpes properly is the preparation to avoid dry edges. As soon as a cooked crêpe is off the pan, allow it to cool on a plate. Then stack the cooled crêpes and cover them with plastic wrap to seal in the moisture. If you’re fastidious, you can layer wax paper between each crêpe to stop them from sticking to each other and tearing when you separate them later.

Crêpes last 3 days in the fridge. But they get progressively drier and more stale as time goes on. You should freeze them as soon as possible if you know you can’t finish the leftovers in a day.

Because the crêpes are often wider than my plates, I bundle the plastic wrap around the plate on the “x- and y-axes” going underneath the plate to capture the overhanging crêpe edges. You’ll be glad you used the extra plastic (even if it makes you cringe) because dry edges are the main reason defrosted crêpes become brittle and dry.

I read a lot of crêpe freezing tips on the Web. Here are the main suggestions for how to freeze crêpes:

Naturally, I tried all the techniques (with some variations) and concluded which method is my favorite based on the taste and texture of the reheated crêpes. Let’s take a look at what worked for me.

The best way to freeze 4 or more crêpes

Stack the crêpes on a plate with wax paper, plastic wrap, foil, or paper towels in between. Wax paper is the easiest to work with, followed by the other options in descending order of effectiveness for keeping in moisture. Wrap the plate and crêpes with plastic wrap and freeze. You can remove the crêpes one by one from the freezer if you are not ready to thaw the entire stack.

The best way to freeze 3 or fewer crêpes

Stack the crêpes with wax paper or paper towels in between each layer. Fold the stack in half and place it in an airtight sealable plastic bag to freeze. You’ll have trouble separating each crêpe because they are rolled up so you will need to thaw the entire stack in one go. That’s the tradeoff for the ease of using a plastic bag.

Can you freeze crepe batter?

Yes, crêpe batter freezes fine. But I don’t see much reason to freeze crêpe batter. The batter is the easiest and fastest part to make, even after accounting for straining it with a sieve. Cooking individual crêpes is what takes time so it makes more sense to cook all the crêpes in one go and freeze the leftovers. If you disagree, leave a comment to let me know why.

Can you freeze crepes with filling?

Yes, but I wouldn’t recommend freezing crêpes with the filling, especially if the filling is fresh fruit. Since you likely don’t have a flash freezer at home, the filling will drench the crêpe and make it soggy as it sits waiting to get frozen. Fresh fruit turns mushy when you freeze it. After you thaw the crêpe, the wet filling will make it hard to reheat the crêpe in the pan to return it to its original texture.

Since it doesn’t take a long time to fill a crêpe, it’s best to freeze crêpes flat and without a filling. You can fill them after reheating them.

RELATED: Enjoy French recipes? Learn how to make pâte brisée, buttery French pastry crust, which you can freeze for pies and quiches later.

I compared the taste of crêpes defrosted the day before in the fridge and frozen crêpes, both reheated in the pan. I didn’t notice much of a taste difference. But the already-defrosted crêpes were easier to work with and faster to reheat.

So, if you remember, go ahead and defrost them in the fridge the night before. But don’t sweat it if you forget.

They reheat faster if you don’t have to wait for them to defrost in the pan. But they soften and thaw quickly on the countertop anyway because they are so thin.

How to reheat and fill crêpes 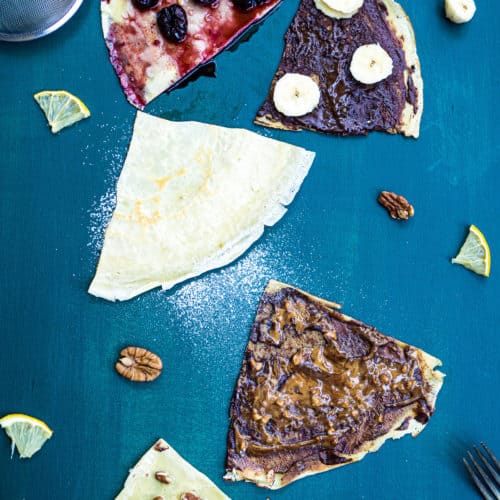 How to reheat crêpes in the microwave

As a lazy person, sometimes I want my crêpe now without turning on the stove. If you microwave a frozen crêpe, it hardens and dries out 🙁. After some experimentation, I discovered you can put a damp paper towel on top of your crêpe and microwave it for 1 minute (start with 30 seconds and check if you need another 30 seconds to avoid overcooking the crêpe).

The damp paper towel does a great job of lightly steaming the crêpe, and it’s ready in 1 minute. The downside is that microwaved crêpes are soggy and lifeless compared to freshly cooked crêpes or even frozen crêpes reheated in the pan. Don’t get me wrong. It’s still delicious, and if you’re having a pajamas day, it’s not a bad technique for reheating.

Can you tell the difference between a freshly cooked crêpe and a reheated one? Taste test time!

Alex tells me that reheated crêpes aren’t as good as the freshly cooked ones if he puts his food critic hat on. But they’re still tasty, and he had no problems downing 2-3 reheated crêpes this past weekend.

Here are ways we spruced up the reheated crêpes to make them tastier:

READ NEXT: How to make an authentic quiche lorraine with and without a flaky crust