Do you feel confused when you see dark soy sauce in a recipe or a bottle of light soy sauce at the Asian grocery store? Let’s break down the differences to help you figure out which soy sauce to use.

Despite my 3 decades of experience pouring soy sauce, I recently got called out for using the wrong type of soy sauce. In writing the recipe for Kari’s Shiitake Mushroom Meat Sauce, it dawned on me that the difference between the dark vs. light soy sauce is unclear to most people who didn’t grow up eating Chinese food.

Let’s dispel the mystery and help you figure out whether to use dark or light soy sauce or both.

Dark soy sauce is sweeter, thicker, and full-bodied compared to light soy sauce. Dark soy sauce is typically used for adding color to a dish rather than for flavor. You are likely eating dark soy sauce in Northern Chinese stir fries or in Shanghai cooking with braised “red-cooked” meats.

NOTE: If a recipe calls for “soy sauce” without specifying which type, it is most likely to be light soy sauce.

What is light soy sauce?

I like the Kimlan brand of light soy sauce. I also use the Lee Kum Kee and Pearl River Bridge brands of soy sauce.

Recipes that use light soy sauce

Pan-Fried Egg Tofu With Chopped Cilantro
Rich and fragrant egg tofu slices are pan fried until golden brown. Double the recipe to serve 4 to 6 people. You'll want to finish it within 10 minutes of pan frying because it won't be crispy as leftovers the day after.
Get the Recipe 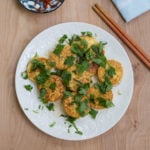 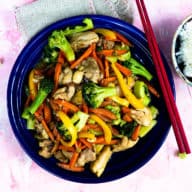 Pin
5-minute spicy garlic cucumber salad
This refreshing garlic cucumber salad is an ideal side dish to balance a heavy main course thanks to its crisp texture and addictive spicy sauce. You'll love it with the original Chinese sauce or the variation sauce if you can't source the exotic ingredients.
Get the Recipe 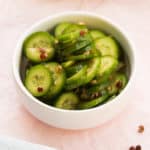 What is dark soy sauce?

I use the Lee Kum Kee brand of dark soy sauce. Sometimes, I buy the Pearl River Bridge brand if Lee Kum Kee is sold out.

Recipes that use dark soy sauce

Kari’s Shiitake Mushroom Meat Sauce
This comfort food envelopes you in warm, fuzzy feelings. This recipe can be doubled or tripled for batch cooking to leave extras for freezing. It's versatile — substitute any ground meat and serve with vegetables, noodles, toast, or soup.
Get the Recipe 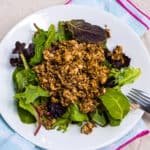 Pin
Easy peasy fried rice with eggs and tofu
This fried rice combines eggs and vegetables to deliver a weeknight dinner ready in 15 minutes. Serve it with sliced green onions, and you'll love how packed with flavor it is.
Get the Recipe 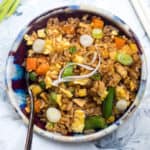 Pin
5-Minute Rice Noodle Rolls with Green Onion
This easy vegan recipe using rice noodle rolls is a quick-to-make appetizer. You'll love the silky texture. Enjoy it as a snack or add vegetables and protein to make it into a full meal.
Get the Recipe 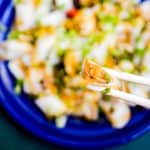 When do you use both dark and light soy sauce?

I like to use both dark and light soy sauce when I want the richness and caramelization of dark soy sauce to give the dish a full-bodied punch. It is a similar effect to when you add red wine to stews and braises.

But I’m also looking for the crisp, salty umami that light soy sauce brings. If you have too much dark soy sauce, you end up with a heavy sauce that feels overwhelming after just 3-4 bites.

These soy sauce rules of thumb are made to be broken. Alex loves adding dark soy sauce to his stir fries because he loves salty and rich flavors.

What should you do if you have one type of soy sauce?

If you only have access to one type of soy sauce, then use whatever is available to you.

When you’ve only got light soy sauce

If a dish calls for dark soy sauce, you can add light soy sauce and a pinch of sugar. Be sure to reduce the dish and caramelize any meat to make up for the lack of dark soy sauce with deep browning. You’ll sacrifice some flavor and color, but you can still make the dish.

When you’ve only got dark soy sauce

Next time you’re wondering which soy sauce to use, experiment with adding one and later adding both. Notice how the light and dark soy sauces change the flavor of your dish.

How to make light soy sauce from dark

There’s no great way to convert dark soy sauce into light soy sauce. I would follow the same instructions for diluting the dark soy sauce listed above where you add extra salt and a tiny bit of water to thin it and make up for the saltiness. Alternatively, you could forgo soy sauce and use a light soy sauce substitute.

There are many reasons why someone doesn’t want to or cannot eat light soy sauce (it may not be gluten free, soy allergy, etc.). Here are my favorite substitutes for light soy sauce that work for most recipes:

TIP: Ultimately, if you need to replace light soy sauce, you’re looking for ingredients that add salt and umami. This means you could get creative by substituting ingredients that don’t resemble soy sauce at all, such as Parmigiano-Reggiano or Marmite.

What about low-sodium soy sauce?

Low-sodium soy sauce has less salt added during the process to make soy sauce. Dark and light soy sauce can be lower in sodium than their regular counterparts. So don’t get fooled when the bottle reads “light”.

If you’re worried you’re buying the wrong soy sauce, just buy the regular version and add a tiny bit of water to dilute it if you want less sodium.

We accidentally purchased a mushroom dark soy sauce once because the regular premium dark soy sauce from Lee Kum Kee was sold out. Alex ended up tossing the bottle once he discovered it tasted bitter and “like chemicals”.

Which soy sauce is your favorite? Are you a dark soy sauce lover (like Alex is)? Or do you prefer light soy sauce?

4 thoughts on “Dark vs. Light Soy Sauce: What’s The Difference?”