Love chai lattes but hate the sugar they add at cafes and in pre-mix concentrates? Learn to make EASY sugar-free chai at home, which requires a few tweaks to avoid overpowering bitterness from the tea leaves.

While wild tea plants grew in the Assam region of India for centuries, it was only in the 1800s that the British East India Company began cultivating tea in British India to reduce Britain’s reliance on Chinese tea. (Chai’s legendary history can be traced back to China and the Opium Wars. But that’s a story for another day.)

Chai took off in India when the British-owned Indian Tea Association encouraged factory, mine, and textile mill owners to offer their workers tea breaks. Chai wallahs, street vendors who sell tea and snacks, popped up with the India Tea Association’s support in the early 1990s.

These indie vendors began mixing spices in the tea. They also added increasing amounts of milk from Europe and sugar from British slave plantations. The Tea Association disapproved of this adulterated tea because it reduced the amount of tea leaves consumed.

But it was too late.

Masala chai took off. It became the drink of the working class. Today it’s a hip staple in coffee shops thanks to Starbucks adding Chai Tea Latte to its menu in the 1990s.

Why brew your chai at home?

The mega-chain versions of chai lattes come packed with sugar. A Chai Latte Grande (16 fl. oz. / 473 mL) contains 42 g of sugar or 10 teaspoons. Compare 10 teaspoons to the American Heart Association (AHA) recommendations of no more than 6 teaspoons of sugar, total, a day for women.

With homemade chai, you can control how much sugar and how spicy you want your tea. It’s also better value for your wallet. Using high-quality milk, you can produce a better chai than the pre-mixed commercial teas from the grocery store.

Because this is a sugar-free chai recipe, boiling spices and tea can make a bitter and disgusting tea. The Garlic Delight’s chai recipe tweaks the traditional chai by steeping instead of boiling the tea leaves.

Second, this chai recipe includes toasting the spices based on what we learned in our crushing vs. toasting spices taste test to get you a nutty, almost-chocolately flavored chai.

RELATED: Read Does Crushing or Toasting Spices Make Better Chai? to learn the results of our taste test.

Finally, the recipe includes a little trick to avoid milk from overflowing your saucepan.

Who will love homemade sugar-free chai?

Anybody who loves chai lattes and wants a healthier version than the sugar-laden commercial premade mixes. Enjoy a wonderful autumn drink when the pumpkin spices and vanilla come out in the fall. In winter, you can drink it extra hot to warm you up. In the summer, enjoy iced chai by brewing with less water and adding in a few ice cubes before serving.

What ingredients are in sugar-free chai?

What ingredients can I substitute in DIY sugar-free chai?

The spices in this recipe are:

If you are missing one of these spices or you dislike one of them, omit it. Other spices and flavorings you can add include:

SIDE NOTE: Spices vary in strength depending on freshness and quality. Feel free to experiment with the quantity you need to reach your desired spice levels because my batch of spices may different in potency compared to what’s in your pantry.

This DIY sugar-free recipe calls for black tea. Like with spices, experiment to find what tea you like best with your chai. I used an English breakfast tea.

Sean tells me that Mumbaikar chai uses “mamri” chai. You can get it at the Indian grocery store.

Of course, you can add sugar, honey, and other sweeteners like stevia or artificial sugar to your chai. This is less of a substitution and more of a rebellious addition. But it fits the Garlic Delight’s philosophy of Customize It For Your Tastebuds, so go for it!

The recipe calls for whole milk. You can substitute with whole milk, grass-fed milk, soy, almond, coconut, hemp, oat, buffalo, goat, (human?) and any other kind of milk you can find.

What equipment do you need for homemade sugar-free chai?

Give me homemade sugar-free chai in 3 steps 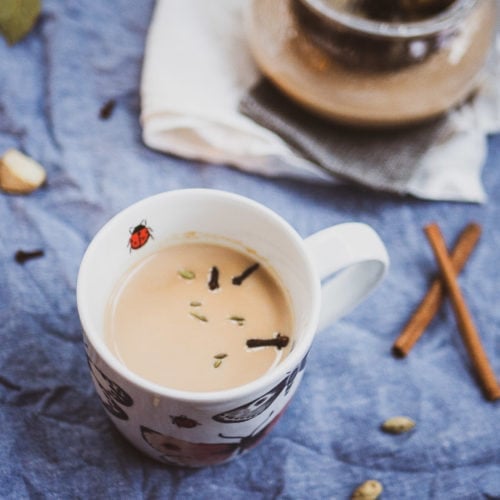 This recipe was adapted from my friend Sean D’Souza’s chai recipe. He shared the masala chai recipe which he grew up with as a “Mumbaikar (that’s people from Mumbai)”.

What to eat with DIY sugar-free chai