You know how much I love taste tests to figure out these questions ?. So, let’s do a taste test on which cake my Americans friends and neighbors prefer: American or French chocolate cake. Which do you think will win?

RELATED: Read the results of other taste tests.

Now, I realize that there are hundreds, maybe thousands, of styles of French and American chocolate cakes. Some have nuts, fruit, liqueur, or all of the above.

If you perform the 2 searches, you’ll find that both French and American chocolate cakes have flour, eggs, sugar, and salt. But that’s where the similarities end.

The difference between French and American chocolate cakes are huge. Let’s dive in.

Based on these differences, here are my opinions about the cake making process.

Many of the taste testers commented that the French cake had a richer, chocolatey flavor and tasted “torte-like”. They told me they liked the American cake better because of how light and moist it is. My friend Cris made an astute comment saying, “Maybe I just like the American cake because that’s how I expect a cake to taste.”

The American chocolate cake won the taste test by a landslide, and it’s easier to make. That makes the American cake the clear winner and will be the chocolate cake recipe that I’m likely to reach for if I’m baking a cake for someone’s birthday (if they’re American, of course).

RELATED: Check out the taste test for hot chocolate vs. hot cocoa.

What to Drink With Chocolate Cake 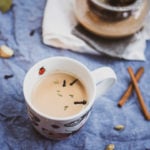 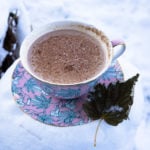