This story contains an affiliate link to a book on Amazon. But just the one 🙂 and it’s about mushrooms.

Every morning, before cooking breakfast, I reliably discover Alex misting his mushroom colony. He gently unravels the translucent trash bag we use to cover the lumpy substrate because our little babies have clearly outgrown their original plastic tent.

#babyshiitake on the way #garlicdelight

He has a ritual by now. Alex begins misting around the edges and sides, moving towards the stems and finally finishes off by spraying the mushroom caps.

They are springy blooms with a velvety head that’s surprisingly smooth to the touch.

#shiitake #mushrooms We’re starting to see our little #blooms coming out Looks a bit gross. But excited to taste it in a few weeks. #garlicdelight

“Don’t touch the mycelium,” Alex cautioned me when I gently poked my finger at one of the mushroom’s caps. “You’ll introduce some bad mold to the colony.”

I looked at him with surprise. I only just realized how protective he’d become of the mushrooms.

“I was only touching the top,” I frowned at him. “I thought you said it was OK.”

“Oh alright. As long as it was just the mushrooms. I thought you were going for the white body,” Alex mumbled as if embarrassed by his own outburst.

When the mushroom kit first arrived in the mail, Alex gingerly removed what looked like a not insignificant clump of white mold. I learned this was a block of powdery sawdust that was healthily colonized.

He kept the fungus in its original box for a few days. One day, he opened the bag and asked me to sniff it. I took my chances and inhaled deeply, wondering what shiitake fungus would smell like. It had a sweet, yeast-like odor, the same smell that every baker enjoys when she is proofing yeast.

On schedule, Alex took the fungus out of its bag and moved it onto a baking tray into the kitchen cabinet on the logic that its new home was a warmish place in the house, which we would walk by every day.

“Paul Stamets, whose mushroom book I’m reading, gave us a tip to put the mushrooms somewhere we would pass by every day so that we remember to water it,” Alex earnestly told me. “We need to keep the mushrooms humid. They like water. Please water it multiple times a day while I’m gone.”

Wow!!! Look at how much the #shiitake #mushrooms grew over 24 hours. You can actually see the #blooms coming in. #garlicdelight

While Alex was in the Sierra Nevada mountains snow camping two or so weeks ago, I diligently spritzed the mushrooms every time I walked past them. It wasn’t hard to remember. Fungi is a weird thing. They seemed cool, looked mysterious, and gave me the weirdest vibes. They drew me to them like a thirsty newborn. 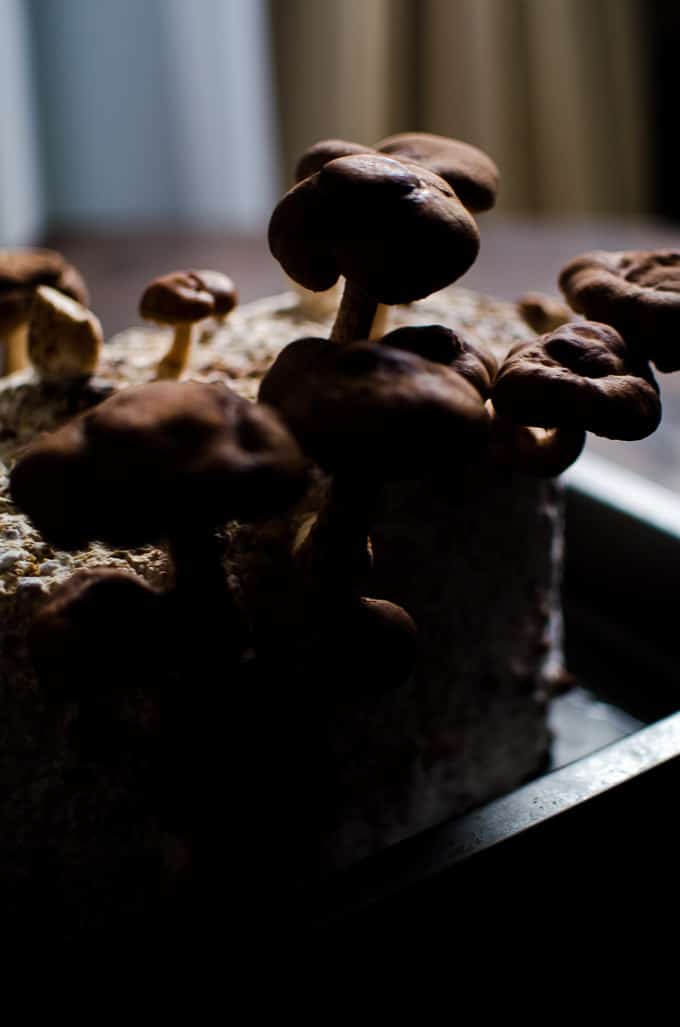 Last week, we spotted some grey-brown nubs protruding from prominent lumps on the block of mycelium.

“Hmmm, that’s weird. Does this mean we’re going to get mushrooms soon?” I asked Alex.

Woohoo! We have baby #shiitake #mushrooms Amazing to see how quickly they grow. Just 3 days ago on Tuesday the mushrooms we’re little bumps on the block. Now they are fully blooming. #garlicdelight

He opened the bag and asked me to smell it. Remembering the tender smell of yeast proofing last time, I expected the sweet doughy smell to greet my olfactory glands. Instead, the block smelled like fresh rain in the woods.

And so it continued with my diligent misting several times throughout the day. Our mushroom babies grew rapidly. It was hard to believe. Alex would mist in the morning. By the evening after he came home from work, we would both swear that the mushrooms have grown at least 30%. Probably more. Even our roommates remarked on the rapid growth.

Since we can’t have pets or children in our current stage of life, our mushroom babies have become our beloved pet. The fungus is a living and breathing organism, and yet mute and stationary without any bodily waste to clean up. It’s ideal in so many ways.

Yesterday, Alex snipped off 5 mushrooms for a pork and mushroom stir-fry. He sliced the mushrooms thinly and added them to the searing wok. The hot oil crackled when the mushrooms jumped in like dry logs in a raging campfire.

Then came the big test. What will the mushrooms taste like? Would they taste like shiitake mushrooms? Would there be enough umami deliciousness to satisfy us? Are these things even edible?

With much curiosity, I took a tentative bite, crossing my fingers that I wouldn’t be disappointed. 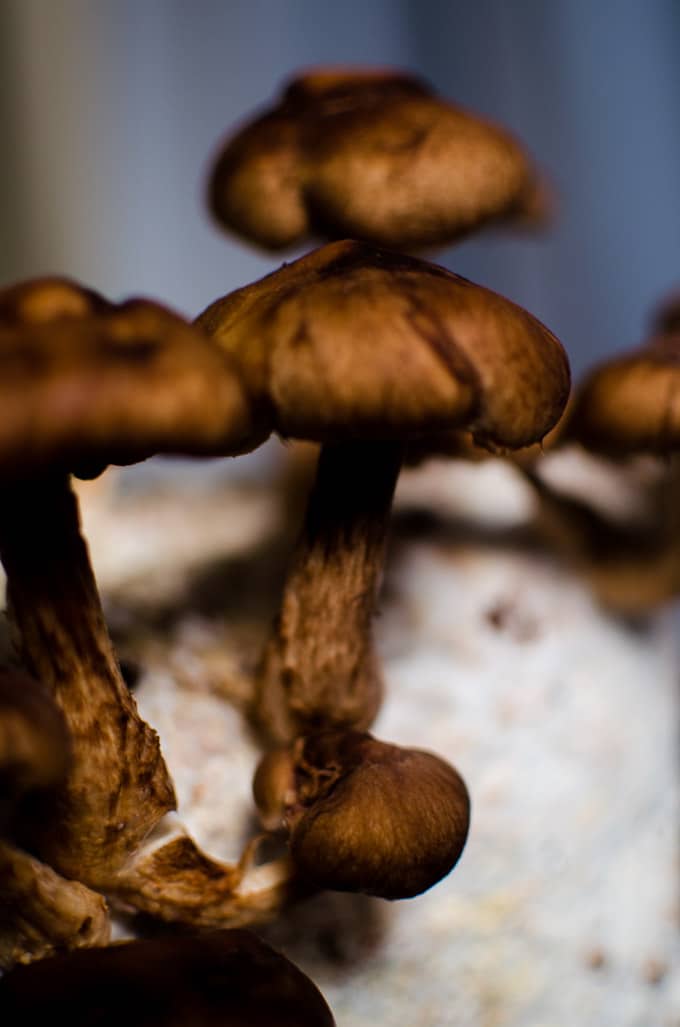 My mouth was a swirl of rich umami flavors thanks to the mushrooms and juicy pork that both contributed plenty of glutamates to my taste buds.

It was worth every last drop of water that I misted on those shiitakes.

Try My Recipes With Shiitake Mushrooms 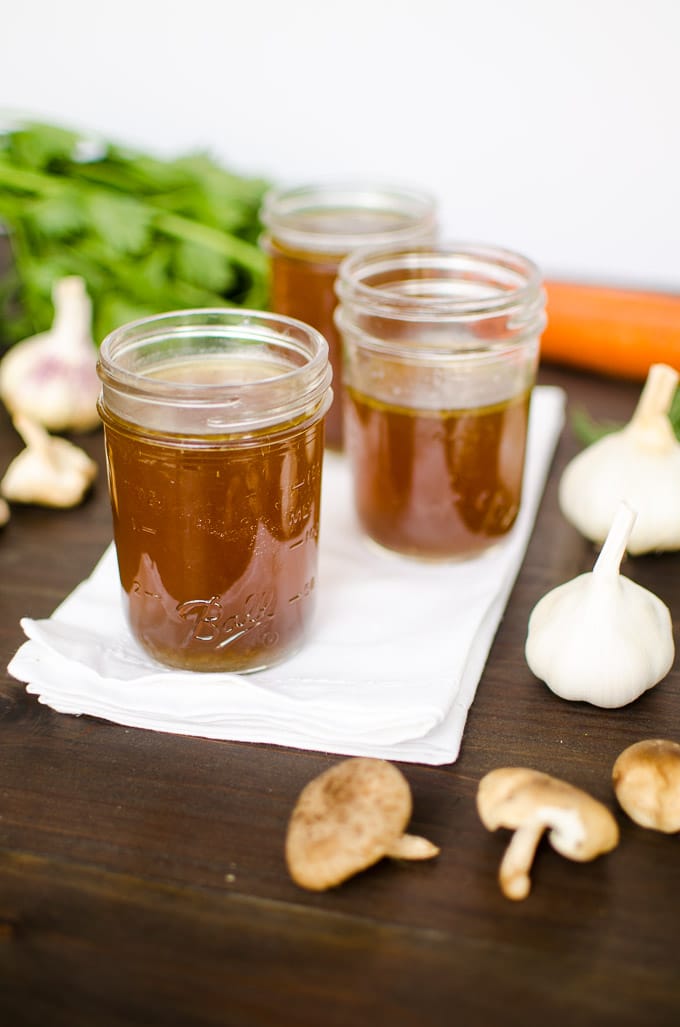 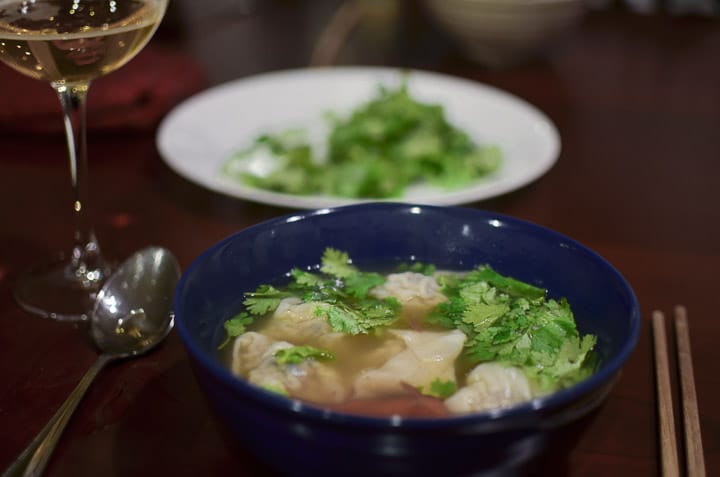