Celery isn’t my favorite vegetable due to its bland and fibrous stalk. It’s often the last one left on the veggie platter. Yet, I’ve learned to cook celery and even enjoy eating it. If you’re looking for ideas to use up leftover celery, read on.

Celery is an ancient vegetable that has appeared in literature since antiquity. It grows in wet, salty, and nutrient-dense marshland.

Although it has a mild flavor today, celery wasn’t always a dull vegetable. It used to be much more bitter and spicy. That could explain why the plant became popular in Mediterranean cuisine and is a staple in many people’s diets.

Celery also has an exciting background. It’s part of a family of plants called the umbellifers. Many plants included in this family are highly poisonous.

Let’s learn how we can cook and store celery in this article.

Celery is a widely used vegetable and a cousin of carrots, parsley, fennel, and other similarly aromatic plants.

It’s a popular ingredient all year round. During summer, celery’s crunch makes it a staple in salads. During the holiday season, celery is a critical ingredient in turkey stuffing and belly-warming stews.

You can eat every part of the celery plant from the root to the stalk to the leaves and seeds. Celery seeds are a popular spice and are often mixed with salt to make celery salt (which is used in the Bloody Mary cocktail drink).

There are 3 main types of celery that we eat.

How to prep celery

Remove the number of ribs you want to use. Clean them well, especially around the root area where they can trap a lot of dirt.

If there are still leaves on the ribs, you can set them aside for another dish. Or if you’re making a stew, stock, or stuffing, you can leave the leaves on for extra flavor.

NOTE: If you’re eating the celery raw and you don’t like the fibrous strings, you can snap off one end of the rib and peel away the fibers.

How to cut celery ribs

Chopping celery into different sizes is important because celery is often added to a dish for its texture. You wouldn’t want an oversized chunk of celery to ruin your salad.

These are the most common cuts for celery.

From the largest to the finest cut style:

NOTE: You can chop celery the same way you would cut carrots. Check out the many ways to cut carrots for inspiration on how to cut celery.

How to eat celery raw

Raw celery delivers a crunchy and refreshing texture. That’s why they’re ideal for:

Celery is also famous for the “ants on a log” children’s snack where you fill the hollow-side of a rib of celery with peanut butter. Then stick raisins into the peanut butter to imitate ants.

You can make a sophisticated version for adults that substitutes cream cheese for peanut butter. You can add walnuts and toasted pumpkin seeds along with different dried fruits, like dried cherries and blueberries, for a fancy finish.

Raw celery leaves can be used to make a pesto. You can also add the raw leaves to vegetable soups or use them as a herb, substituting for parsley.

WARNING: Celeriac leaves are more pungent than the common “Pascal” celery you buy at the conventional grocery store. You may want to nibble on the leaf to decide whether you like the flavor enough to add it to your dish. Aim to use fewer celeriac leaves if you’ve never cooked with it.

How to cook celery

My favorite way to cook celery is to use it as the base aromatics for soups, stews, braises, and roasts. For example, celery would be a great addition to this Lentil Sausage Soup along with the onions and carrots.

You can add sliced celery into stir fries along with chicken, beef, or tofu.

Celery is a great addition to vegetable soups, such as this Italian minestrone soup, and can even serve as the centerpiece as in this creamy celery soup.

If you’re cooking celeriac, the root is the focus. You can make a crunchy celeriac salad. Or treat the root like a potato by boiling and mashing it. The root is also great roasted the same way you might roast parsnips.

Chinese celery is much tastier than the conventional celery common in North America. It’s less fibrous and very fragrant.

Chinese celery with pork is a very common filling for homemade dumplings, although I rarely see it sold in grocery stores outside of Asian supermarkets.

When we last visited Shenzhen, we had hot pot with my parents’ friends. At the end of the hot pot, when the broth was richly flavored with all the ingredients we boiled in it, Aunty Yang encouraged Alex to make a bowl of soup with chopped Chinese celery. It was packed with flavor with a satisfying bite.

Celeriac Root with Honey Mustard Dressing
Celeriac root, with its mild and unusual celery flavor, offers a crunchy texture in this simple salad. The honey mustard dressing is subtle and complements celeriac wonderfully in this refreshing recipe.
Get the Recipe 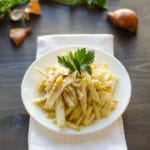 Pin
Extra Umami Beef Broth
Ask for good stock bones from the butcher. They usually store them in the back so you may not see them waiting in the display case for you.
Getting a diverse mix of knuckle and marrow will add a lot to your broth, providing flavor and gelatinous goodness.
Using a pressure cooker speeds up the cooking time. It also allows you to set it and walk away.
Get the Recipe 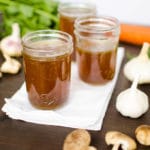 Pin
Spicy Jambalaya with Chicken, Shrimp, and Sausage
This Spicy Jambalaya is inspired by Nolas, my favorite restaurant in downtown Palo Alto. Our recipe is a spicy take on the traditional jambalaya thanks to the Italian sausage substitution. This dish contains sausage, shrimp, and chicken.
Get the Recipe 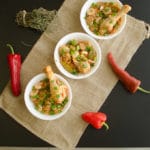 How to substitute celery

If you’re using celery ribs raw for the crisp texture, you can substitute it with raw carrots, cucumbers, and zucchini for dipping.

If you’re using celery in a salad or for an aromatic, you can substitute it with bell peppers/capsicum, carrots, or fennel.

If you’re substituting celeriac root, you can use potatoes, parsnips, sweet potatoes, or beets.

If you’re substituting celery leaves, you can use parsley, or another herb in the same family, like fennel, chervil, or cilantro.

Where to buy celery

If you want the leaves, you may need to visit a farmers market or organic produce store to buy celery that still has all the leaves on top. Otherwise, all conventional grocery stores sell bunches of celery.

For celeriac, I’ve purchased it at a farmers market, in CSA boxes, and at Whole Foods.

For Chinese celery, check out your local Asian grocery store.

TIP: I noticed larger grocery stores are now selling celery by the rib. While it’s pricier than buying a head of celery, I love this concept as I usually only need 2-3 ribs at a time. I’m buying these individual ribs now so I don’t end up tossing out the whole bunch when it’s rotten in a month.

Yes, it began as a winter and early spring vegetable. However, celery is available all year round.

How to pick celery

Choose firm celery with parallel ribs (they shouldn’t be splayed out). If the ribs look limp or have brown spots on them, they’re not fresh.

The ribs should be tightly packed with springy leaves that are bright green outside and a pale green-yellow inside, closer to the heart of the celery.

How to store celery

Trimmed celery should be stored in a sealed container. If it looks like it’s drying out, you can submerge it in water to lock in moisture.

According to this article from Washington State University, you can store celery wrapped tightly in aluminum/aluminium foil in the fridge. This allows “the ripening hormone ethylene to escape”. With this technique, you can keep celery fresh for weeks.

Storing celery in an open plastic bag is OK if you plan to use it within 7 days. Any longer, you should try the foil method as the plastic bag will encourage the celery to spoil faster.

NOTE: If you have too much celery and don’t know how to eat it all before it goes bad, check out this vegetable broth base recipe from America’s Test Kitchen. Instead of celery root, I would substitute with 2-3 ribs of celery. Since this broth base lasts for 6 months, it’s a great way to use leftover celery.

Fun things to do with celery

Check out this article on how to store groceries so they last longer. There’s a tip on how to bring celery back to life in a jar of water. You can even grow celery from the cut ends for a few weeks using this method.

How to eat celery if you don’t like it

I hear you. The easiest thing for me is to eat cooked celery. Cooking breaks down the fibers. I like cooking celery in olive oil, garlic, and salt and add some chicken or beef broth to give it flavor.

I predominantly use celery as an aromatic in soups and stews.

Honestly, if I cook celery in stock, I usually toss it out. So, don’t feel bad about not eating celery.

Is celery a “negative calorie” food?

No, celery contains 10 calories per rib, according to Healthline. So you will get more calories by eating it, debunking the myth that celery is a “negative calorie” food.

According to Dad Cooks Dinner, the botanical meaning of a “stalk” is the entire head of the celery. Each “stick” of celery is called a “rib”. Therefore, a “stalk” of celery could contain as many as a dozen “ribs”.

Many recipes refer to a “stalk” of celery when they mean a “rib”. Be careful when you’re looking for trustworthy recipes.

When in doubt, use a rib (a stick) of celery, even if the recipe is calling for a stalk. Or find a better recipe with photos!

A head of celery is generally referring to the whole bunch of stalks attached together near the root of the celery plant. This is similar to the usage of a “head” of broccoli or lettuce.

So if you see a head of celery in a recipe, it’s referring to the entire bunch of ribs attached together.

READ NEXT: A Nerd’s Complete Guide to Cooking Cabbage